BY LINDA EGENES
Fifty years ago, the US educational system scored the highest in high school graduation rates among twenty-seven industrialized nations. Today, we rank twenty-second, with dropout rates of 27 percent. And for underserved African-American and Hispanic students in urban schools across the nation, the dropout rates are much, much worse—close to 40 percent. 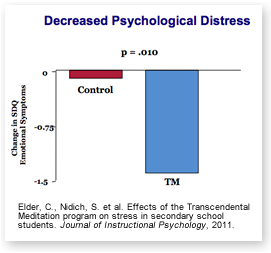 Studies published in peer-reviewed journals already show that TM significantly reduces stress in adults. Now a growing body of research from the University of Michigan, American University, and the University of Connecticut shows that it is equally effective for children and adolescents.

As you would expect, the rest of the numbers don’t look good either. According to the National Assessment of Educational Progress, which functions as a kind of nation’s report card, the US is flunking. Two out of three eighth-graders can’t read proficiently. Nearly two-thirds of eighth-graders scored below proficient in math.
Yet there are bright lights in the educational landscape. In some of our most troubled schools, students, administrators, and teachers have implemented a program called Quiet Time, which allows students to be quiet, read, or practice meditation for ten minutes twice a day on school time. The Transcendental Meditation technique is one of the options for Quiet Time.
Recent research shows that Quiet Time is having a positive impact, with one urban school reporting an increase in attendance to 98.6 percent, an 86 percent drop in suspension, and a 42-point gain in academic performance on state tests. Research on the Quiet Time program in other troubled urban schools reveals equally impressive results, with reduced symptoms of ADHD and other learning disorders, 40 percent reduction in psychological distress, and 65 percent decrease in violent conflict over two years. And yes—one study showed a 15 percent improvement in graduation rates.

“The Quiet Time program helped us change the predictive power of demographics,” says a principal of an embattled West Coast, urban school.

But how does it work?

“All of us have kids you try to teach but their heads are down on the desk,” says the now retired superintendent of a school district that was one of the first to bring Quiet Time into its schools. “They’re out of it while you’re trying to teach. Why? Because of their lives. Because of stress.”
According to an American Psychological Association survey, 27 percent of adolescents report feeling extremely anxious during the school year. One in three children are obese and 11 percent have been diagnosed with ADHD. All of these problems are related to stress—and all can hamper a child’s learning ability.
Studies published in peer-reviewed journals already show that TM significantly reduces stress in adults. Now a growing body of research from the University of Michigan, American University, and the University of Connecticut shows that it is equally effective for children and adolescents.
For instance, a new study published in the Journal of Instructional Psychology found that TM significantly decreased psychological distress in public school students. The study, conducted with at-risk, minority, secondary-school students, showed a 36 percent reduction in overall psychological distress. Significant decreases were also found in trait anxiety and depressive symptoms.
One thing is clear to researchers and educators alike: lessening the stress can have a positive impact on mental health, heart health, and academic achievement.

It turns out our nation’s middle schools are especially vulnerable to the double whammy of stress and low academic achievement—and for at-risk kids in urban schools, the scores are much lower than the nation’s norms.
Yet the journal Education recently reported that students from an urban middle school saw their academic achievement improve when they experienced more inner quietness and less stress after the introduction of the Quiet Time program with the TM option.
“These initial research studies, showing the benefits of the Quiet Time program on reducing stress and raising academic achievement, hold promise for public education,” says Sanford Nidich, EdD, professor of education and lead investigator of both studies. “The findings suggest that there is a practical, value-added, educational program which can help low-performing minority students begin to close the achievement gap.”
Another pioneering study focused on graduation rates in an East Coast, urban high school. Graduation rates are the litmus test of educational success—and recent data shows that only 69 percent of students graduate from our nation’s schools.
“Urban schools on the whole tend to suffer from a range of factors that contribute to poor student academic performance and low graduation rates,” says lead author Robert D. Colbert, Ph.D., associate professor at the University of Connecticut.
Results showed a 15 percent higher graduation rate for a group that was practicing the TM technique as compared to non-meditating controls. The largest effect was found in the most academically challenged students, with a 25 percent increase in graduation rates. 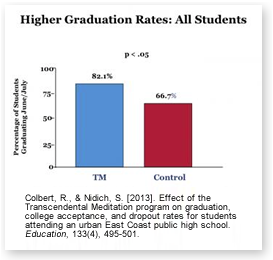 Results showed a 15 percent higher graduation rate for a group that was practicing the TM technique as compared to non-meditating controls. The largest effect was found in the most academically challenged students, with a 25 percent increase in graduation rates.

Findings also showed that meditating students were less apt to drop out from school or enter prison, and were more likely to be accepted to post-secondary institutions.

Researchers now understand that stress also affects concentration, focus, and other functions of the developing brain.
For example, researchers today understand that problems such as ADHD, the inability to control attention, are caused by underdevelopment or underutilization of the prefrontal cortex, which shuts down under stress. By addressing that stress, students can bring about a marked and highly visible increase in the coherent functioning of their brains.
In a landmark study published in Current Issues in Education, researchers Grosswald, Stixrud, and Travis looked at brain functioning of children with ADHD who practiced the TM technique, as compared to controls.
“In just six months, the brain functioning of the meditating students had moved from being solidly within clinical ADHD symptoms to just within normal brain functioning,” says Dr. Travis, Director of the Center for Brain, Consciousness, and Cognition.
“What that means in practical terms is that they were able to start self-regulating both physical and mental impulses,” he says. “So, for example, they were able to remember to raise their hand before speaking.”
Based on these initial findings, Dr. Travis and his colleagues decided to look at brain wave coherence, as measured by EEG, to find out if the practice of TM could help children with ADHD develop a more integrated brain functioning.
“In this random-assignment pilot study of children with ADHD aged eleven to fourteen, we saw significant increases in coherence in all parts of the brain in four frequency bands,” says Dr. Travis. “This means the brain is ceasing to function as isolated modules and is beginning to function more as a whole.”
Dr. Travis explains that integrated brain functioning results in improved focus on schoolwork, organizational abilities, ability to work independently, level of happiness, and quality of sleep.
“The TM group also improved in something called ‘letter fluency,’ which measures the ability of the frontal lobes to generate many new ideas, to be more creative,” he says.

It’s not only the kids who are stressed these days. Half of new teachers bow out after just five years on the job, says the National Commission on Teaching and America’s Future. This is especially a problem in urban schools, where a higher turnover rate results in a higher percentage of under-qualified teachers.
According to the National Center for Education Statistics, it’s teacher burnout that is causing teachers to flee.
So once again, stress is the culprit. Just as it’s hard for teachers to teach stressed kids, it’s equally hard for kids to learn if their teachers are depressed, anxious, scattered, or sick from an overload of stress.
Fortunately, TM can be equally effective in helping teachers as it is with students. A randomized, controlled study recently published in the Permanente Journal was conducted over four months at the Bennington School in Vermont, a special, in-residence school for students with behavioral problems. 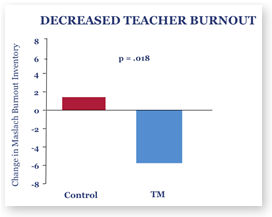 “The results of this randomized, controlled trial are very striking and demonstrate the utility of introducing a stress reduction program for teachers and other public and private employees,” says Dr. Charles Elder, MD, MPH, a Senior Physician in the Department of Internal Medicine at Kaiser Permanente Northwest and the lead author of the study. “The four-month study found significant and clinically important decreases in perceived stress, emotional exhaustion associated with teacher burnout, and depressive symptoms in those practicing the TM program compared to a wait-list control group.”

To help underserved kids learn, acclaimed movie director David Lynch established the David Lynch Foundation for Consciousness-Based Education and World Peace in 2005. To date, it has awarded scholarships to over a hundred thousand at-risk students around the world, including the Quiet Time programs in Detroit, Phoenix, Los Angeles, New York, New Haven, Chicago, and Washington, DC. In addition to funding research, the DLF also funds programs for prisoners, veterans with PTSD, victims of domestic violence, and the homeless to learn the TM technique and start a new life of positive transformation.
David Lynch is passionate about helping kids reduce stress, succeed in school, and follow their dreams. “In today’s world of fear and uncertainty, every child should have two short class periods a day to dive deep within themselves and experience the field of silence and inner happiness —the enormous reservoir of energy and intelligence that is deep within all of us,” he says. “This is the way to save the coming generation.”
Now there are dozens of other schools waiting for funding to implement the Quiet Time program.
For the school administrators and teachers who have seen their schools transformed with Quiet Time, it’s a program that holds great promise for educating children and providing them with an immensely valuable tool for life.
“The research is showing us that the experience of restful alertness provided by TM is an important educational experience that promotes learning, reduces violence, and supports healthy psychological development,” says Dr. Jamie Grant, National Director of Programs for the David Lynch Foundation. “This experience belongs in schools everywhere.”
(I originally wrote this interview for Enlightenment Magazine Issue number 23. Reprinted with permission.)