Guest Post—Ann Purcell on TM and My Creative Process 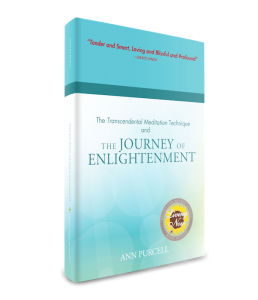 The Journey of Enlightenment by Ann Purcell

Many artists get asked the question, “What is your creative process?” I think most artists would say that it just happens and that they don’t have a particular process. Why some people are artists, musicians, writers etc. and others are athletes, business people, social workers etc. is a magical mystery.
I never considered myself a creative person, nor did I grow up in an artistic atmosphere. I was raised near the ocean where outdoor sports was the way of life. I played tennis; my parents were golfers and my brothers surfers. In school, I excelled in sports and did not pursue writing, music or art. Artistic pursuits weren’t even a consideration.

In 1972 I learned the Transcendental Meditation technique. One of the first things I noticed as a result of the practice was that I had all this extra energy, which needed to be directed into some channel. I took up cooking. After about two years I started to hear words and phrases in my head. I began a journal to write down what I was hearing. Sometimes I would write prose and on occasion I wrote a poem. In time poems, or the first couple of lines, began to sound inside my mind.

Soon I started to hear melodies as well. I did not consider myself to be musical. I never even thought of trying out for the school singing groups as I did not have a strong voice. However, I had a passion for listening to music and alone in the car, I would sing away to the songs on the radio. I also listened to my records for hours in my room.
What Unleashed My Creativity?
What was happening inside me? Why was I starting to hear and write songs and poems? During my meditations, I experienced a deep level of silence. It was like a crystal, still pond that I could also visually see. I realized I was accessing the source of all sounds, words, and music — the field of infinite creativity. Also, the surface noise in my head — anxiety, pressure from work, to do lists, etc. — was dissolving as stress was released due to the deep rest I gained during TM.

Accessing this field of pure silence twenty minutes twice daily in my TM practice unleashed this flood of creativity. Being clearer headed was allowing me to perceive the stream of creativity that was rising from this very still level within.

TM Helps Us Access the Source of Creativity
In his book Catching the Big Fish, the great filmmaker David Lynch describes this creative process:
“Here’s how it works: Inside every human being is an ocean of pure, vibrant consciousness. When you “transcend” in Transcendental Meditation you dive down into that ocean of pure consciousness. You splash into it. And it’s bliss. You can vibrate with this bliss. Experiencing pure consciousness enlivens it, expands it. It starts to unfold and grow . . . . You can catch ideas at a deeper level. And creativity really flows. It makes life more like a fantastic game.”
Many artists and musicians describe this effortless experience of creativity in which they feel they are not doing anything and the process of creation is happening by itself.

The following poem called “Am I the Poet?” expresses this effortless flow of creativity.

Am I The Poet?
Am I the poet of this poem
of each expression rising from within?
Silence stirred, an impulse heard
beyond all meter, beyond all word . . .

Am I the writer of these lines?
Each phrase appearing on my screen
is just a seed sown for silence to flow
in any way the wind blows . . .

Am I the composer of this song
of the sounds of silence singing?
Wholeness bent, on self-intent
for me to be silence’s instrument . . .
Some people are naturally born with specific creative abilities and also seem to have a deep connection to the spring of creativity within themselves. However, I know now first-hand that anyone can develop their creativity if they first tap into the field of silence and infinite creativity by practicing TM.

All Life is Creative
Creativity is not just limited to the arts. Mothers have to be resourceful every day in raising children. In business, creativity is the name of the game. Every act of life can be a creative endeavor. The flow of creativity is intensely joyful. If you want to unleash the waves of creativity in your life, dive into the depths of your consciousness to the infinite source of all creativity and you will soon enjoy the effortless flow of a more creative, happier, and fulfilling life.
Ann Purcell is the author of the book The Transcendental Meditation technique and the Journey of Enlightenment. She is a regular contributor to Huffington Post. In addition she is a singer-songwriter and has produced many CDs including her recent release, You’re a Hero— Songs for Children.