The Light of Compassion: Teaching Transcendental Meditation in Thailand 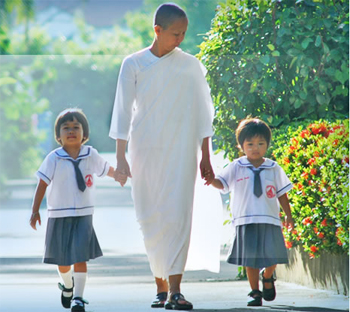 Thailand is a mystical land of Buddhist temples and an ancient culture steeped in spirituality. Yet when the modern world collides with traditional cultures extreme poverty, dissolution of families, and exploitation of children—especially girls—can result.

Unlike Thai boys, who receive a free education in Buddhist monasteries, disadvantaged Thai girls have far fewer opportunities to raise themselves out of poverty. In many cases their only chance for survival is to live on the streets or work in factories at a young age, leaving them prey to drug addiction and prostitution.

Acharn Yai, a Buddhist nun, saw clearly that education was the only way to break this cycle of poverty and exploitation. Yet thirteen years ago when she approached the education ministry to start a free school for girls, they discouraged her. “This is too much for you,” they said. “How will you get the money, the teachers, the resources?”

They did not recognize the power of one woman on a mission. In 2003, Acharn Yai founded Dhammajarinee Witthaya School, the first and only free Buddhist boarding school for Thai girls. The school now has 530 in-residence students from preschool through grade 12, taught by 41 teachers. In order to accommodate 500 more girls who wish to attend the school, a new classroom building is already under construction. 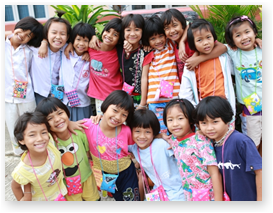 The story of one woman uplifting thousands of girls from poverty is inspiring, to say the least. These girls not only receive safe haven and a free education—they are being transformed in ways that no one could have predicted or imagined.

The school recently was granted the top academic rating during the government’s yearly assessment—one of two schools in the entire province to be honored. And the students consistently win top awards in every school competition imaginable, from speaking English to Thai language skills to PowerPoint presentations. In fact, this year they have won more awards than any other school in their province.

At the heart of these students’ transformation from illiteracy to academic leadership, the teachers say, is the students’ daily practice of the Transcendental Meditation technique.

They come from all over Thailand, speaking many different dialects. Some are orphans, some from families destroyed by divorce. Others, members of the hill tribes huddled at Thailand’s northern borders, suffer from extreme destitution. Some have been abandoned to the streets. Often their parents are young and ill-equipped for raising a child. One young mother dropped off her preschool girls because her new boyfriend didn’t want them around.

One thing these children have in common: they have learned to fight to survive.

Acharn Yai tells about a fourteen-year-old girl who was sentenced to prison, but the judge sent her to Dhammajarinee Witthaya School instead. “In the beginning she quarreled with everyone—with teachers, with friends. She was rebellious and not interested in studying,” says Acharn Yai. “After this girl learned TM, her behavior completely changed. She is much softer and more humble with other girls. Now she is a leader.”

One of the school’s teachers, Acharn Chakriya, remembers a girl who was sent by UNESCO as a last resort because she had been kicked out of every other school. “She was so big and combative that even the teachers were afraid of her,” says Acharn Chakriya with a laugh. “After she learned TM, she started helping the other students and made it her job to sweep the floor for the younger girls to sit on when they meditate. And just today she won the first prize in singing for the whole province! She said she meditated before the competition.” 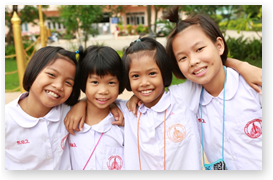 Acharn Yai says that she sees this pattern over and over—the girls come in fighting, but with the TM program, the aggression goes away.

“The students become more calm and settled,” says Acharn Yai. “Their aggressive behavior decreases, their grades go up; they pay more attention to whatever we teach them. When they have inner happiness, they soak up whatever knowledge we give, unlike before. Because of their TM practice, the school is doing better and better.”

Before the school introduced the TM technique in 2008, it was much harder to teach the girls, says Acharn Chakriya. “The teachers never even tried to send the girls to competitions because the girls weren’t ready.”

The teachers also have become stronger and better equipped to help the students. Acharn Chakriya remembers one young teacher who was so worried about what other people thought about her that she suffered from chronic headaches. “After learning TM she’s more relaxed and happy and doesn’t worry about what others think about her anymore,” she says. “She is more focused in her work. Now, in addition to teaching, she trains the students to attend competitions. With her guidance, the students are winning the number one or two awards at every competition. This raises their self-esteem and lets them know that they can rise above their circumstances and accomplish anything they want in life.”

The school day is full and structured, and the girls are focused from dawn to dusk. In addition to their Buddhist studies and daily practice of the TM and TM-Sidhi program, the students learn basic academic subjects, allowing them to go on to higher education. They also receive vocational training.

The girls learn how to bake, grow organic vegetables, create traditional Thai handicrafts, perform basic accounting, arrange flowers, crochet, weave baskets and create Thai flower garlands. This training is critical for those not attending college, as it gives them a way to make a living when they graduate. In keeping with Buddhist principles, the students also spend time every day performing service. They keep the buildings orderly and tend the beautiful gardens.

Learning how to use the Internet, make PowerPoint presentations, and create basic computer programming is an important part of the curriculum.

Acharn Yai is not a typical Buddhist nun. For one thing, she drives a car, uses a cell phone, and is committed to employing the best of modern technology to help the school thrive, even creating her own videos for fundraising.

Amine Kouilder, a student at Maharishi University of Management who filmed the remote school, said that he first glimpsed Acharn Yai’s computer acumen when she told him that he could edit his footage on her iMac using Final Cut Pro editing software that she had loaded on it. “And they had a video camera that was more recent than mine,” he remembers.

It would be hard to imagine anyone as suited to the job of leading the school as Acharn Yai. As she walks through the peaceful campus, the sounds of Buddhist chanting mingle with birdsong. The younger girls flock around her as she walks. It’s obvious that she is not only revered by them, but dearly loved.

“She is a universal mother, so compassionate,” says Anarbha Supaneedis, a teacher of the Transcendental Mediation technique who helps teach the new students who come each year. “I feel my heart melting when I see how much she loves these girls and wants to take care of them and nourish them in every possible way.”

Outsiders also have recognized Acharn Yai’s gifts. In 2012 she received the Enlightened Leadership award from the Global Mother Divine Organization in Vlodrop, Holland. And for her service in providing a free education to thousands of girls in poverty, she was honored with a service award for her leadership in Ratchaburi province, where the school is located.

It was Acharn Yai who made the decision to introduce the TM technique to the school’s staff and students in May 2008, having heard about the educational benefits. Yet she herself preferred to remain a cautious observer and even went into hiding while the TM instruction was taking place so she would not get pulled into learning. 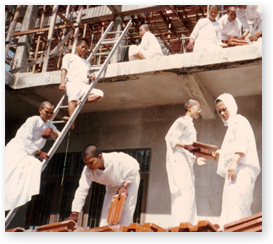 A few months later it became clear to her that the atmosphere of the school had already transformed. “Everyone seemed to be happier and more harmonious, unlike before,” she says. “I heard no complaints about any difficulty or headaches from the TM practice even among the youngest students. This was a surprise to me because I had experienced complaints in the past from teaching Buddhist meditation to the girls.”

She became curious about why this simple and easy technique could make such a dramatic change in her school. To find the answer firsthand, she finally decided to learn Transcendental Meditation in December 2008.

Ever humble and honest, Acharn Yai says she has experienced positive changes from practicing the TM technique for five years. “It benefits my life as a whole—making me healthier and calmer. The most obvious change in me is my emotions. I usually was a hot-tempered and impatient person. But after practicing TM, I became more peaceful, modest and careful. I am able to understand other people better than before.”

“When we practice TM, we go to the source of pure consciousness and purify stress. When we come out of meditation, we naturally think good, speak good, and act good. It’s completely effortless and natural. When we have less stress, we don’t have to force ourselves, we don’t have to try to be good. We naturally live the teaching of Lord Buddha—to think good, to speak good, and to act good. So TM and Buddhism are very related.”

Based on her own experience, Acharn Yai not only became the first Buddhist nun to become a teacher of the Transcendental Meditation technique, but she arranged for the students to take the next step and begin the more advanced TM-Sidhi program in 2009. By the end of December 2013, there will be over 300 students and teachers practicing the TM and TM-Sidhi program together at the school.

The construction of a large building, built according to the principles of Maharishi Vedic Architecture (Vastu) is now underway to accommodate the 500 additional girls. A significant portion of money has come from the government and private donors, but the school still needs to quickly raise $95,000 to finish this large building in 2014.

This dynamic woman is thinking beyond the individual lives of these students, to ways they can become a force for good for the entire country. If she realizes her goal of providing room for 1,000 students, then more than 800 students and teachers will be practicing the TM and TM-Sidhi program together.

Noting research on the positive changes that take place for the community and nation when large groups of people practice the TM-Sidhi program together, Acharn Yai aims to create nothing less than national coherence for Thailand. And that will be the greatest transformation of all.

See a longer version of the school video
To make tax deductible donations to support the classroom building project and support invincibility for Thailand, please visit: http://www.seedsofheaven.org/donate/2-uncategorised/66-thai-girls-school.html.  Be sure to note your contribution is for Thailand School project.

(I originally wrote this interview for Enlightenment Magazine, Issue number 16. Reprinted with permission.)