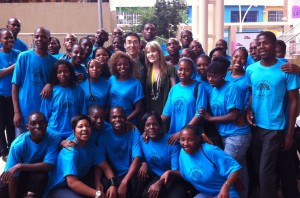 When apartheid ended in 1991, people all over the world rejoiced as South Africa stepped into an era of equality and progress. Yet nearly twenty years later, the majority of South Africans are still living in high-density shack communities and squatter camps, many without running water or electricity. Three out of four youth are unemployed, spending their days roaming the streets of the townships without hope of a higher education or a job.

One bright light is the Maharishi Invincible Institute (MII) in Johannesburg, which serves students who normally would not receive a higher education. Every student is instructed in the Transcendental Meditation and TM-SidhiSM program  as part of the curriculum, and every student receives free access to a university education. 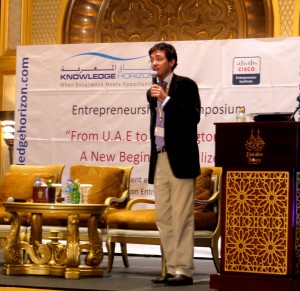 Dr. Taddy Blecher, Dr. Richard Peycha, and Dr. John de Jager are the founders of Maharishi Institute, an umbrella organization that runs the school. These three visionaries have spent their lives teaching the Transcendental Meditation technique to disadvantaged youth in South Africa, and have pioneered the free post-secondary education movement through the free universities that they’ve established.

“In 95 percent of the cases, our students are the first in their family to attend college,” says Dr. Blecher, who was a 2005 World Economic Forum “Young Global Leader of the World” recipient. He was also named a Skoll Global Social Entrepreneur, winning a $1 million prize for his university.

The results have been nothing short of spectacular. Through MII and earlier universities the three founded, students who otherwise would have remained in hopeless poverty have gained new skills and found jobs. More than 5,500 graduates are earning a combined $32 million per year, much of which goes back to disadvantaged communities and families. Hundreds of graduates now work in the banking industry, and over 2,000 graduates work in the IT sector as programmers and network engineers. Others work in the Johannesburg Stock Exchange, in the government, or have started their own companies.

“It’s literally night and day what happens in their lives and the lives of their families after they receive a Consciousness-Based education,” says Dr. Blecher.  “Our graduates can earn enough money in two years to buy and build a house with water and electricity, and over time can support their extended families. It’s a source of tremendous pride for someone with no hope for the future to become someone who is highly respected in their community.” 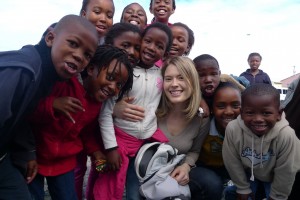 A Foundation in Consciousness

Started in 2007, MII has 450 students and offers certificates in business in partnership with Regenesys University, the top business school in the country. It recently added an undergraduate degree in business by Maharishi University of Management, with the first class graduating in June 2013.

Before students begin a degree or certificate program, they take a minimum of four months in foundational courses, including math, computer skills, and the Transcendental Meditation technique. This allows them to make up for gaps in their education and to develop their ability to concentrate and solve problems.

“Our students are successful because of the support programs we offer,” says Dr. Blecher’s wife, Annie, who is the director of marketing and fundraising. The dynamic couple met when Annie joined Maharishi Institute in 2008 as part of her graduate work at Maharishi University of Management.

“A textbook is a textbook, but it’s the Consciousness-Based education, the mentorship, and the loving environment that is different from any other university in South Africa,” she says.

At MII, students not only receive zero-interest study loans (bursaries) to cover tuition, they receive free instruction in the TM and TM-Sidhi program, a daily lunch, free clothing, and leadership training weekends at the University’s sister school in Ezemvelo Nature Reserve.

Although the school days are long and the students work hard, they are enthusiastic. “I love the education system because it’s all about Consciousness-Based education, says student Thabang Msomi. “I don’t feel a lot of pressure because everything is simple. ”

The school building, which is large enough for 2,000 students to attend in shifts, was donated by Anglo American, the largest mining company in South Africa. While the school still depends on generous grants and donations from the Kellogg Foundation and others, it was founded on a unique vision to become self-supporting. As part of their day, the students who have graduated from their foundation work in the Invincible Outsourcing call center on the university campus or in a university staff position.

“The money they receive in this ‘Learn and Earn’ program goes toward paying back their student loan or to support another student in a pay-it-forward plan,” says Dr. Blecher.

The advantages of this program are many. Not only do the students gain valuable work experience while they study—improving their job prospects—but they grow in self-confidence and pride by supporting themselves and others.

“I feel very special getting a business degree which will enable me to apply all the skills and knowledge to bring positive change in South Africa and the economy,” says Mamiki Motaung, a third-year student.

With the work-study model, the school is on track to become self-supporting in another year. “We’re trying to create the first self-funding university in the world where the students don’t pay any money, the government doesn’t pay any money, and the students earn money and pay their own fees while going to school,” Annie explains.

“And because MI has its own self-funding mechanism, we will be able to realize Maharishi’s vision to replicate the school in every province in South Africa and every country in the continent.”

Outreach to the Townships

Another unique aspect of the school is its outreach program. On holidays and weekends, the students return to their own high school to teach short courses in financial literacy, math, computer skills, and healthy living (HIV and AIDS prevention).

“The students at Maharishi Institute of South Africa become tremendous role models,” Dr. Blecher says. “They can say, ‘I came from this exact high school where you are sitting, and if you study hard you, too, can go to college.’”

The Blechers seem to have boundless energy, spending fourteen-hour days on campus. Twice a day they replenish themselves by joining the students in a large group for the TM and TM-Sidhi program. And they gain tremendous energy and fulfillment from their work.

“It’s nothing short of miraculous how these programs can take entire families out of poverty in one generation,” says Dr. Blecher. “That’s the reason I get up every morning and feel a rush of excitement, because we have a methodology that works. There’s nothing more fulfilling that we could be doing with our lives.”

Linda Egenes is co-editor of Enlightenment: The Transcendental Meditation® Magazine. She is the author of five books, including Super Healthy Kids: A Parent’s Guide to Maharishi Ayurveda, co-authored with Kumuda Reddy, M.D.

(I originally wrote this interview for Enlightenment Magazine, Issue number 12. Reprinted with permission.)